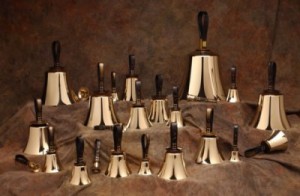 Wednesdays
5:30 – 6:30 pm
Bell Room
We play frequently through out the year during the 1st and 2nd service and have been requested to play at funerals held at the church as well.
Nursery/child care is available upon request.

Handbells were invented in 17th-century England, as a solution to a noisy problem. People living near church bell towers had grown tired of listening to long change-ringing rehearsals. The invention of smaller, quieter bells that could be rung with one hand made it possible for rehearsals to take place in the spirited warmth of pubs.

It wasn’t long before people realized that handbells could be used for more than change-ringing, and people began to assemble fully-chromatic sets of bells.

Handbells were first brought to the United States around 1840, where they were popularized by P.T. Barnum as a circus attraction. Not long afterward, handbell teams went into the Vaudeville circuit. In the 1940’s, people began ringing handbells in American churches. Handbells were first manufactured in the United States in the 1960’s. Today there are over 10,000 handbell choirs in North America, most of which are associated with churches.

Bells are among the most ancient of musical instruments, and have been  used in worship since the some of the earliest documentable times.  First United Methodist of Gilbert has a long tradition of bell choirs.  Our  ensemble generally rings with 9-10 bell ringers (playing Schulmerich  Bells, as well as Suzuki Tone Chimes. The Wesleyan Bells welcomes capable ringers of high school age and above.

For any questions, please email Jonathan Cochran or contact the church office: 480-892-9166 or secretary@gilbertumc.org