“You shall love your neighbor as yourself.” 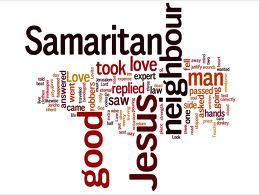 Jesus said, in several settings that this was the second most important commandment, after loving God with all our heart, mind, soul, and strength.  A lawyer who had come to test Jesus asked him, “Who is my neighbor?”  He was hoping for an answer that would limit his liability; that would draw some lines defining not just who he needed to love but who he could “not love” and be ok.  Petersen translates the lawyers intent this way:  “The lawyer, looking for a loophole….”  The lawyer, who was part of the religious institution of his time, wanted a box; something that would contain and limit his responsibility to others so he could feel safe.  Jesus blew up his box by telling a story in which key representatives of that religious institution, the Temple, were the bad guys.

The story is familiar, often topped with the heading, “The Good Samaritan.”  A man is badly beaten and left by the side of a desolate road in the middle of nowhere.  A priest, one of the highest officials in the temple hierarchy, walks right by him.  The truth is really this:  had he touched the man on the side of the road, he would have rendered himself unable to carry out his priestly duties.  He had a really good excuse for not helping!  A Levite, part of the priestly order but lower on the totem pole, also walked by  the man without offering assistance.  He similarly had “ritual purity” considerations.  Had either of them stopped to give assistance, they might have had to skip the next Administrative Board meeting, or perhaps the choir rehearsal or the praise band practice while they went through the rituals required to restore purity.  They had jobs to do!  They chose to favor their obligations to the institution of the Temple over their obligation to show mercy to a human being lying in need before them.

The one who “did the right thing” and tended to the man, acting as his loving neighbor, was a dreaded Samaritan:  one who did not worship properly, one who was ALWAYS ritually unclean.

In Heidi Baker’s phrase, we are to “stop for the one,” rather than walking on by because we have something we believe to be more important to do than render aid.

What if we became a church in which folks were routinely late to or absent from regular meetings because they could not go by the “one” they encountered on their way to the church?  What if when they texted to let the others know what they were doing, the automatic response was, “How can we help? Do you need us to come?”  What  if our gatherings for fellowship and food became wedding feasts for the poor, the lame, the lowest of the low as we went out deliberately to put the needs of those on the margins, those “lying by the side of the road” above our own needs and concerns?

Maybe it would begin to look a lot more like the kingdom of God!  May it be so!