What does the kingdom cost?? 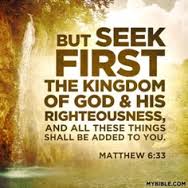 Sunday we completed a four week message series on the Kingdom of God, as we talked together about the cost.  For the rich man, who had a heart for God and a fervent desire for eternal, abundant life, the cost was his “stuff” and his money.  Jesus did not judge the man or his wealth.  He loved him.  He saw in him a love for God and a willingness to do almost anything to know God more deeply.  Jesus wanted to help the man achieve what he longed for.

But he could see that something was in the way of that happening.  So, not to judge, and not to punish, and not to create unhappiness, but to help the man move forward in his pursuit of the one thing that matters more than any others, he said simply, “sell all your possessions, and give the money to the poor.”  Then he issued a personal invitation:  “Follow me.”

The man was shocked.  He had lots of possessions.  He went away, grieving – not because Jesus had meant to hurt him, but because Jesus showed him the cost of the kingdom.  He was the only person in the New Testament who received a personal invitation from Jesus and did not accept it.

He must not have known how precious the kingdom is.  Jesus reflected on the value of the kingdom in the parable of the pearl of great price:

“Again, the kingdom of heaven is like a merchant in search of fine pearls; on finding one pearl of great value; he went and sold all that he had and bought it.”  – Matthew 13:45-6.

What does the kingdom cost?  Whatever we hold more dearly than we hold God.  Why do we pay the cost?  Because we were made to be citizens of the kingdom, and we will never find anything more valuable, more meaningful, more precious, more purposeful, more hopeful than stepping into that destiny.

The kingdom costs everything that we value.  And it is worth the cost!