Freely you have received, freely give……. 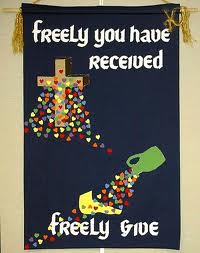 I find myself sad to come to the end of the story of Jonah.  So few words; so many lessons — most of them not for children but for adults.  The portrait of Jonah pitchin

g a fit is so poignant.  He didn’t want to go to Nineveh.  No way, no how.  He didn’t try very hard to do a good job.  He didn’t preach a good sermon at all.  And yet they were saved.  So Jonah pitches a little fit, accusing God of all kinds of awful things:  being good, and merciful, steadfastly loving, claiming he would rather die than live after being forced to take part in saving them.

The Ninevites, on the other hand, did none of those things.  They didn’t even know who God was.  They lived as they pleased.  They weren’t entitled to God’s mercy.  How dare God!

med unaware of his own need for God’s salvation, as he whined and moaned and pouted about how he had been dragged into saving the Ninevites.

That was HIS mission.  OUR mission is to “Go make disciples of all nations……”  It was the last thing Jesus said before he departed earth.  I think we are about as willing to do it as Jonah was willing to go to Nineveh.  It isn’t that we don’t think the folks out there are worth saving.  It’s just that we aren’t sure they are worth what it would cost US to do our part in bringing the good news of Christ into their lives.  We don’t know how.  We aren’t sure how to start.  We really don’t want to learn.

And yet our God loves them perhaps especially, because they still need the touch of his love in a special way.  Many stories are about God’s unorthodox, reaching love, which seems intent on being sure everybody gets to the party, no matter who they are or what they have been up to.  The elder son had a hard time accepting that the prodigal deserved a party.  The story of the shepherd going to find the lost sheep sounds good if you are the lost one but not so hot if you are among the 99 left behind

Go make disciples.  That’s what we are to do.  Go show the world God’s love.  Go make it real in a human life.  Go up to someone you’ve never met to ask if they would like prayers for the arm in a cast, or for a visible wound or weakness, or just because an inward witness  pointed them out to you.  Cross the chicken line to share God’s love.  Freely, Freely, we have received.  Freely, Freely, give.while the shepherd searches.